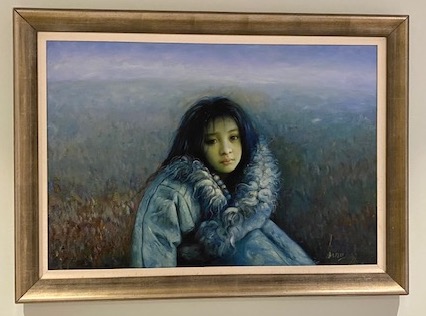 Today is the twentieth anniversary of my wedding that wasn’t.  I also consider it to be the 20th birthday of the painting I refer to simply as “The Girl”, which I bought from an art store on Patong Beach in Thailand, where I fled on my own to wait out the ignominy of the day.

The girl has graced the wall of every bedroom I have had since then.  Her expression is difficult to read. Others have said she looks sad, but I have always thought that she looks slightly wistful, like she is thinking of a road she could have taken, but ultimately decided not to.

The story of that broken engagement is not one I recall with pride, even though I know my decision was the right one that freed us both to make better decisions about the lives we would lead and the people we would be wedded to through the ups and downs that lay ahead.

It takes courage to make a decision that is right when you know it will cause heartache to someone you care deeply for. In my case, I’m not sure I would have found the courage to break off the engagement if my fiancé had not said, with his heart breaking, that we didn’t need to go ahead with the wedding if I wasn’t sure I was ready. Even then, I avoided breaking off the relationship entirely.  It wasn’t until my very wise sister said that, as much as I cared for him, I simply couldn’t be the one to help him through the hurt I had caused by breaking off our engagement.

I had to trust that he was resilient enough to find his feet without me in his life. And I know that he did.

Have there been times when you have persisted with a course of action that no longer suited you because you lacked the courage to disappoint someone whose opinion you valued?

A couple of years ago, my daughter was itching to give up guitar lessons she was taking at school. We encouraged her to think about whether she was giving up on what she wanted most – to be able to play the guitar – for what she wanted now. When we were sure she was making the decision for the right reasons, we said that she could do it but that she would have to be the one to write to her teacher thanking him for what he had taught her and explaining her reasons for not continuing with formal tuition.

There were a few life lessons for her to learn here:

Most importantly, YOU are not a disappointment simply because you make a choice that disappoints someone else.

I have talked to a few wise women about this issue recently and picked up a couple of pearls of wisdom.

It’s OK not to give detailed reasons for making a decision that causes mild inconvenience to another person. “I need to change this appointment” is usually enough – they don’t need to be convinced that your reasons for changing plans are suitably compelling. Your track record of keeping your word will be enough to assure the person that you are not inherently unreliable or inconsiderate.

The second touchstone offered to me was that, whenever you are confronted with a choice between disappointing someone else and disappointing yourself, it is your duty to let the other person down.

If I had gone ahead with my 2 September wedding in the year 2000, not only would I not have bought the painting of the girl, but I would have been the one looking wistful about another road I could have taken but didn’t because I lacked the courage to disappoint my fiancé and all the friends and family who were invested in our wedding. Wistful too about another person I could have been.  One who was braver and wiser and more willing to risk loneliness in order to find a partner who I would love and be loved by in equal measure. I hope that, if you are struggling with a decision that requires you to dig deep into your hidden reserves of courage, my story will inspire you to step bravely into a future that allows you to be proud of yourself.  Don’t be the one you disappoint. Ever.